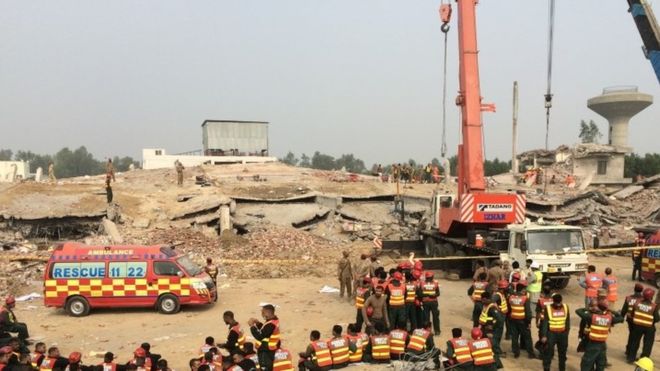 Washington, DC—The Child Labor Coalition (CLC) laments the tragic deaths that occurred Wednesday in the collapse of a plastic-bag factory in Lahore, Pakistan. At least 23 workers died in the factory, including an unknown number of child workers. Rescuers have pulled more than 100 survivors from the rubble, but dozens of other workers still trapped are thought to remain.

South Asia has been the scene of a number of factory tragedies in recent years. In 2013, more than 1,100 workers died in the Rana factory collapse in Dhaka, Bangladesh. In 2012, more than 100 workers died in the Tazreen fire just outside of Dhaka. That same year, 289 people were killed in a fire in Karachi, Pakistan, and on the same day, a shoe factory fire in Lahore killed 25 workers.

“This latest Lahore collapse highlights the vulnerability of factory workers,” said Sally Greenberg, co-chair of the CLC and executive director of the National Consumers League. “Factories must be inspected regularly, and officials should be on the constant lookout for children working in these unsafe environments. Young children should not be dying in factory collapses; they should not be working in factories at all. Western consumers bear some responsibility for creating the awful conditions that lead to these tragedies because of the constant demand for the cheapest-possible products produced at great speed.”

“The conditions that lead to these kinds of tragedies are a violation of human rights, they are avoidable, and they must stop,” said Dr. Lorretta Johnson, secretary-treasurer of the American Federation of Teachers, a co-chair of the Child Labor Coalition.  “We know that change is possible, and we call upon the government of Pakistan to press its efforts to ensure a culture of rights, not only through inspection and monitoring of factories, but also by the critical elimination of exploitative child labor.”

“In Pakistan, according to data provided by the U.S. Department of Labor, only 72 percent of children between 5 and 14 attend school,” said Reid Maki, CLC coordinator. “Two and a half million children between 10 and 14 are estimated to work. Tragic deaths of children like those in the factory collapse in Lahore will continue without a concerted effort to remove children from exploitative work and get more children into school.”