Twenty-five to 30 kids a year die at work. Through its advocacy and co-chairmanship of the Child Labor Coalition, the National Consumers League (NCL) has worked to reduce that number over the years. Each spring, NCL produces a report called “The Five Most Dangerous for Teens.” For several years, we worked to help enact proposed rules to protect kids working in agriculture. Last April, working through the CLC and its members we helped organize a press conference to highlight the dangers that young workers can encounter while working on farms and agricultural facilities.

Unfortunately, the organized farm lobby succeeded in forcing the Obama administration to withdraw the youth farm safety rules—a decision that we estimate will lead to the unnecessary deaths of 50 to 100 youth working on farms over the next decade.

This week, we heard the sobering story on National Public Radio (NPR) and the Public Broadcasting System’s News Hour each featured in-depth stories about a particularly lethal type of agricultural work: labor in grain silo facilities, which in a typical year kills 15 or more workers. According to recent data, 20 percent of the victims of grain engulfments are young workers.

NPR and PBS worked with the Center for Public Integrity, highlighting a terrible tragedy in Mount Carroll, Illinois nearly three years ago. Two teens, “running down the corn,” were engulfed by grain and killed while working in a silo: 14-year-old Wyatt Whitebread and 19-year-old Alex Pacas. Will Piper, a 20-year-old co-worker, barely escaped with his life because someone threw him a bucket that he was able to put over his head. The bucket prevented the flowing grain from asphyxiating him. Today, Piper lives in guilt because he found the job that killed his best friend Alex.

Among the worst aspects of the Whitebread-Pacas accidentally deaths, which we highlighted in our April 2012 press conference, are the facts that Wyatt, at 14, was too young to be doing such dangerous work. He and Alex also should have been wearing safety harnesses as they walked on top of the crusty grain trying to loosen it. The facility possessed the mandatory harnesses that would have saved the boys lives, but did instruct or compel the teens to wear them.

END_OF_DOCUMENT_TOKEN_TO_BE_REPLACED 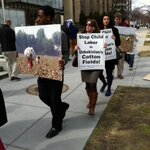