“I clean the floor many times in a day. When it is not well done, my employer throws the dirty water at my face.” This is how girl from Togo describes her experience with child labor to Anti-Slavery International (ASI) researchers. She is a child domestic worker, enduring her employer’s abuse.

The International Labour Organization estimates that 15.5 million children around the world are involved in domestic work in a home other than their own; 10.5 million of these children are involved in child labor as they are either under the legal minimum working age, or employed in hazardous conditions or conditions akin to slavery.In 2008, 61 percent of children in domestic labor were between 5 and 14 years of age; one-third were under age 12. Seventy-three percent of children engaged in domestic work are girls.

Child domestic labor is one of the most widespread and exploitative forms of child labor in the world. Child domestic workers help with the day-to-day tasks of running a household. These may include cooking, cleaning, caring for children or the elderly, gardening, running errands, and other tasks, as well as selling goods in the marketplace and on the street.These children may live with their employers or separately from them; they may receive financial remuneration for their work or “in kind” payment like food and housing. The hours are long, and many child domestic workers report that they are continually on-call.

The reasons children end up in domestic labor vary by country and region, but poverty is usually a major factor. Child domestic workers are often overlooked in attempts to protect child workers, partly because of the notion that domestic work is a “safe” form of employment. However, because these children work inside private homes, they are especially isolated and at risk for abuse.

According to the ILO, three-quarters of all children in domestic child labor perform hazardous work. This can include children working for at least 43 hours per week, working at night, and being exposed to physical or sexual abuse.

The ILO reports that significant numbers of child domestic workers are victims of trafficking, debt bondage, or servitude.Approximately 225,000 of these children work in Haiti’s restavek system, trapped in what amounts to forced labor and slavery.From the French words rester avec (“to stay with”), restavek children, usually girls, from poor rural backgrounds are given or sold by their parents to work as domestic servants for other families. ASI and Free the Slaves (FTS) report that restavek children are treated as sub-human, and are extremely vulnerable to exploitation as well as physical, psychological, and sexual abuse.

END_OF_DOCUMENT_TOKEN_TO_BE_REPLACED

[Please click on the image to make it bigger]. 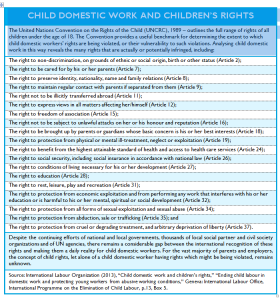 It is important to note that many countries have good laws that protect children from exploitation, but they lack enforcement. A legal framework for protection is an important first step in safeguarding children.Major exemptions exist. For example, in the U.S., a 12-yearold in Agriculture can work unlimited hours–as long as school is not in session during those hours.

This infographic has been developed by our program partner the World Policy Analysis Center at UCLA’s Fielding School of Public Health.

[When the map appears, you may click on it to see a larger version.] 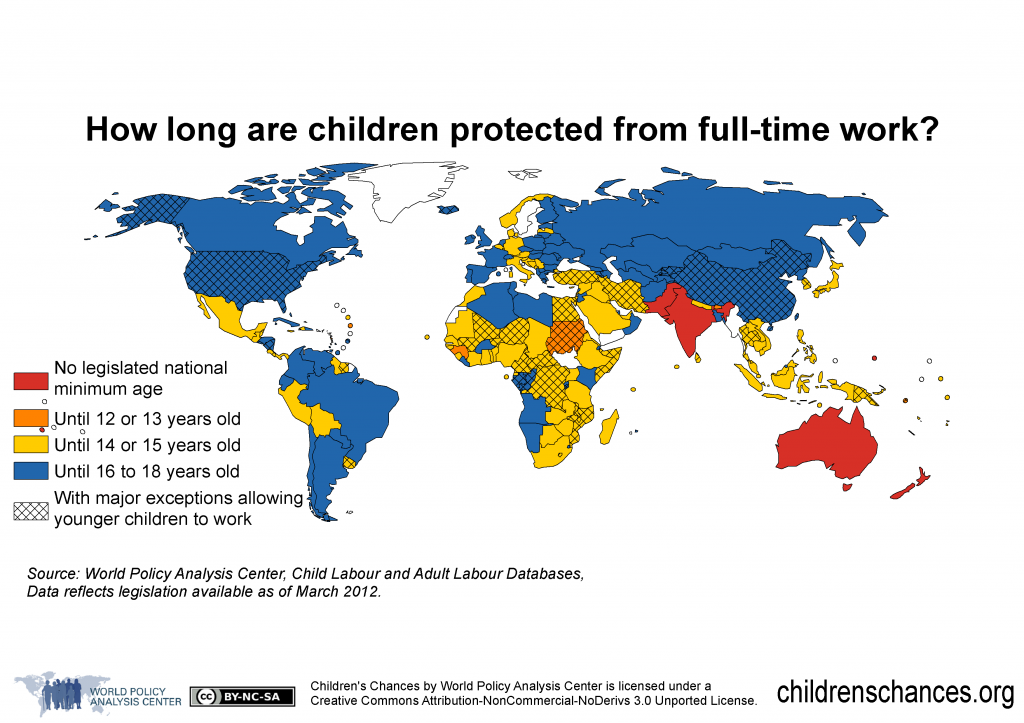