Do you ever think about people from the past you wish you could go back in time to meet? At the top or near the top of my list is César Chávez, who was born on March 31st in 1927. César died in 1993 a few months before I started working for a farmworker organization, the Association of Farmworker Opportunity Programs (AFOP).

For the last 22 years, my work with that AFOP and then the National Consumers League and the Child Labor Coalition has involved trying to obtain equal protection for farmworker children under US labor law. The legacy of César cast a big shadow on our efforts. His success in raising the public consciousness gave all of us hope in the advocacy community that we might help Americans to care about migrant farmworkers and their plight and the conditions endured by their children working in the fields beside them.

César was born in 1927 in Yuma, Arizona in an adobe home on his parent’s ranch, which eventually was lost during the Great Depression. His family joined the exodus to California where they began work as migrant farmworkers and faced many hardships. The family would pick peas and lettuce in the winter, cherries and beans in the spring, corn and grapes in the summer and cotton in the fall.

Poverty forced César to drop out of school in the 8th grade to work in the fields. After he returned from a two-year stint in the Navy, César returned to California, married and eventually had eight children. Through much of the 50s, he worked for and eventually headed the Community Service Organization, a Latino civil rights group. In 1962, he and Dolores Huerta cofounded a group that would later come to be known as the United Farm Workers (UFW) of America.

In the fertile California fields around him, César saw workers performing back-breaking work for wages that kept them in poverty. In 1965, he helped lead the five-year Delano grape strike. He also led the historic 340-mile protest march of thousands of striking farmworkers to the state capitol in Sacramento, inspiring many Americans. The union reached out to consumers and asked them to boycott grapes in support of the workers—an estimated 17 million Americans joined the boycott. Eventually, the growers were forced to recognize the union and raise workers’ wages. Around the country, other farmworker unions formed to advocate for farmworkers.

In the early 1970s, the UFW won passage of the California Agricultural Labor Relations Act, allowing farmworkers to bargain collectively.

Throughout the late 1960s and early 1970s, César inspired the public by conducting a number of personal fasts, including one lasting 25 days, as part of his advocacy. Senator Robert Kennedy famously visited César to help draw attention to farmworker conditions.

César also espoused non-violent tactics used by Martin Luther King and Gandhi. His leadership and sacrifice helped a lot of average Americans to empathize with the struggles of migrant farmworkers. He helped give power to the powerless. 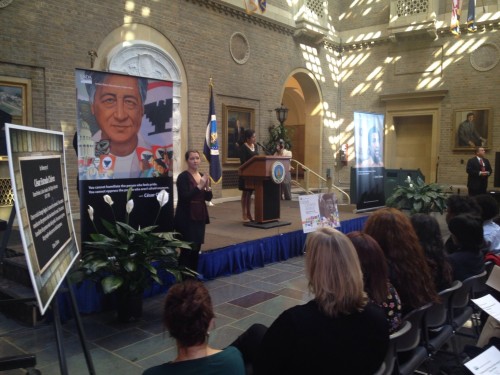 Today, in Washington, the Secretary of Agriculture Tom Vilsack and the U.S. Department of Agriculture honored the legacy of César by naming the department’s primary interior courtyard after him. César’s daughter, granddaughter, and son-in-law spoke in a public ceremony about the unfinished work that remains, including the deportation of hundreds of thousands of farmworkers, the lack of immigration reform, the worsening conditions for many rural workers and the need to advance rural cooperatives accessible to Latino workers.
One of those pieces of unfinished work that we at the Child Labor Coalition (CLC) and the National Consumers League are very much involved in is closing loopholes in U.S. child labor law that allow children, as young as 12, to work unlimited hours in US fields. This week we met with Secretary of Labor Tom Perez, leaders from the White House, and 16 representatives of tobacco companies and tobacco growers to discuss child labor in US tobacco fields. 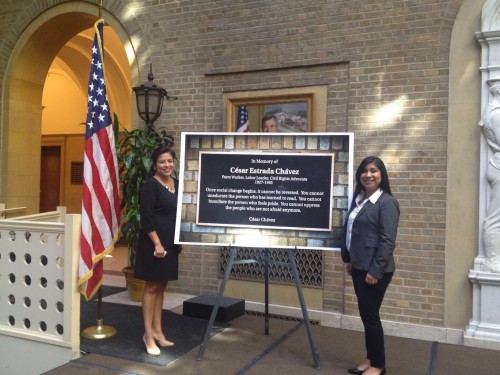 Child labor in US agriculture concerned César. In his 1984 Commonwealth Club address in California he tried to warn the public about unfinished work:

“Child labor is still common in many farm areas. As much as 30 percent of Northern California’s garlic harvesters are under-aged children. Kids as young as six years old have voted in states, conducted union elections, since they qualified as workers. Some 800,000 under-aged children work with their families harvesting crops across America. Babies born to migrant workers suffer 25 percent higher infant mortality rates than the rest of the population. Malnutrition among migrant workers’ children is ten times higher than the national rate.”

César continued:
“All my life, I have been driven by one dream, one goal, one vision: to overthrow a farm labor system in this nation that treats farm workers as if they were not important human beings. Farm workers are not agricultural implements; they are not beasts of burden to be used and discarded. That dream was born in my youth, it was nurtured in my early days of organizing. It has flourished. It has been attacked.”

Today, on the anniversary of his birth, we are inspired by the life of César Chávez and are committed to increasing wages for adult farmworkers so that parents are not compelled by poverty to bring their children to the fields with them.

We are committed to change US child labor laws so that they do not discriminate against Latino children.

We envision a future in which the sons and daughters of migrant children have the same educational opportunities as other children and are able to fully participate in the American dream.
As César and his beloved farmworkers often chanted, “Sí, se puede – Yes, we can!”

There are 13 million (8.8%) of children in child labor in Latin America and the Caribbean