It’s been referred to as a “ticking time bomb” – the Corona virus and its potential impact on farmworkers– the incredibly hard-working men, women, and children who our fruits and vegetables and provide other vital agricultural work. Farmworkers perform dirty back-breaking work and are notoriously underpaid for it and at great risk from COVID-19.

Farmworker advocacy groups that NCL works with or supports like Farmworker Justice, the Coalition of Immokalee Workers, the United Farmworkers of America (UFW), the Farm Labor Organizing Committee, and a national cadre of legal aid attorneys have spent weeks strategizing about ways to protect the community which they know is especially vulnerable to the virus.

Advocates have reached out to administration officials and Congress for desperately needed resources to support impoverished farmworker with little to show for it. Despite their essential contributions to the economy, farmworkers have been cut out of the emergency relief packages.  The Trump administration has even revealed plans to lower pay for agricultural guest workers who sacrifice home and family to come to the U.S. to perform arduous farm labor. Advocates fear that decreasing guest worker wages would drive down low wages for farmworkers already living and working in the U.S. 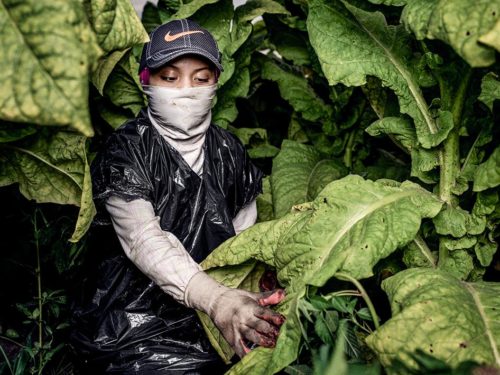 “Sofia,” a 17-year-old tobacco worker, in a tobacco field in North Carolina. She started working at 13. She tries to protect herself from nicotine poisoning by wearing plastic trash bags and a mask. COVID presents new and scary risks. © 2015 Benedict Evans for Human Rights Watch

Farmworkers are poor, with extremely limited access to healthcare. Their poverty often means they work through their illnesses. The workers often toil closely to one another as they harvest fruits and vegetables; they ride to the fields in crowded buses and cars; they have limited access to sanitary facilities, including hand-washing. They often live in overcrowded, dilapidated housing.

The majority of farmworkers are immigrants from Mexico or are the children of Mexican immigrants. The community is socially isolated from main stream America. Poverty forced many farmworkers to leave school at an early age. It also causes them to bring their children to work with them in the fields—-child labor supplements their meager incomes. Language and cultural barriers further their isolation. NCL, through the Child Labor Coalition which it founded and co-chairs, has committed to the fight to fix the broken child labor laws that allow children in agriculture to work at early ages—often 12—and to perform hazardous work at age 16.

When the virus began to move into America’s rural areas, many socially- and culturally-isolated farmworkers hadn’t heard about the virus.  Some were confused that the grocery store shelves were empty; that the bottled water they usually buy suddenly cost much more.

In some cases, farmworkers reported that the farmers they work for have not told them about the virus or the need to take special precautions while working. Farmworkers face an alarming dearth of protective equipment. Many farmworkers groups, including the UFW and Justice for Migrant Women are urgently racing to provide masks and other protective gear.

A farmworker with COVID-19 is unlikely know he or she has it and is very likely to keep working and infect his or her family and coworkers. Recently, a growers group tested 71 tree fruit workers in Wenatchee, Washington, according to a report in the Capital Press newspaper. Although none of the workers were showing symptoms of COVID-19, 36 workers—more than half—tested positive!

The conditions faced by farm workers are a “superconductor for the virus,” noted advocate Greg Asbed of the Coalition of Immokalee Workers in a New York Times opinion piece, “What Happens if America’s 2.5 Million Farmworkers Get Sick?” The answer, he concluded, is that “the U.S. food supply is in danger.”

The current circumstances reminded Asbed of a previous crisis: “A century ago in ‘The Jungle,’ Upton Sinclair wrote about how the teeming tenements and meatpacking houses where workers lived and labored were perfect breeding grounds for tuberculosis as it swept the country.”

“Now there is a new pathogenic threat and the workers who feed us are once again in grave danger,” said Asbed, adding that the “The two most promising measures for protecting ourselves from the virus and preventing its spread — social distancing and self-isolation — are effectively impossible in farmworker communities” because farmworkers live and work so closely together.

The looming food crisis is not just an American phenomenon, reported the New York Times, April 22nd in an article ‘Instead of Coronavirus, the Hunger Will Kill Us.’ A Global Food Crisis Looms. “The world has never faced a hunger emergency like this, experts say. It could double the number of people facing acute hunger to 265 million by the end of this year,” noted reporter Abdi Latif Dahir.

“The coronavirus pandemic has brought hunger to millions of people around the world. National lockdowns and social distancing measures are drying up work and incomes, and are likely to disrupt agricultural production and supply routes — leaving millions to worry how they will get enough to eat,” added Dahir.

“Full Fields, Empty Fridges” in the Washington Post April 23, warned that in the U.S. the farm –to-grocery distribution system is breaking down under the strain of the virus and that farmers are plowing in fields of crops. The Trump administration has announced a $19 billion plan to buy agricultural products and get them to food banks, which are experiencing shortages and, in some cases,  lines of cars waiting for help that are over a mile and a half long.

In the U.S., the federal government’s responses have been focused on helping farmers—which is fine, we all want farmers to be helped—but we cannot forget or neglect the needs of desperately poor farmworkers.

END_OF_DOCUMENT_TOKEN_TO_BE_REPLACED

by Verité, an organization that improves working conditions worldwide through a network of over 120 employees, consultants, and partners. 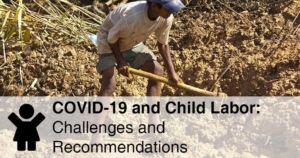 As is the case in most crises, the most vulnerable in society will feel the worst impacts of COVID-19. Children, especially those from poor communities, are at particular risk of exploitation as parents fall deeper into poverty during the ensuing economic crisis and face appalling choices about how to sustain their families. Some may feel forced to send their children into the labor market while others seeking employment risk being trafficked for forced labor. COVID-19 may increase the risk of child labor in the following ways:

Schools are closing for indefinite periods of time

Freedom of movement is increasingly restricted

Although businesses must make hard financial and practical decisions during times of crisis, the moral and legal imperative to protect workers in company supply chains applies even more in these times of burgeoning vulnerability. Companies must identify risks, sustain commitments to human rights, and address the unique vulnerabilities of workers and children who are employed at the bottom of supply chains. Steps that companies should take to address the increased risk of child labor during the coronavirus crisis include:

Companies should conduct due diligence to ensure that pandemic response activities do not contribute to the exploitation of children.

Companies must assess where risks are highest in order to prioritize interventions.

Companies must ensure that supplier policies provide sufficient support to workers and their families at the commodity level.

Companies must involve at-risk youth in the identification of needs for support services.

This article originally appeared on Verite’s web site on April 21, 2020.

Please send questions and topics for future articles related to COVID-19 in supply chains to covid19@verite.org.

The photo included in this article is used solely to illustrate the locations and situations in which risk of forced or child labor is being discussed. The people shown in the photo(s) do not represent any specific person or group of people noted in the text.

END_OF_DOCUMENT_TOKEN_TO_BE_REPLACED

Today is Mother’s Day, the day of the year when we celebrate our mothers. But in so many countries, mothers are far too young. In fact, in many places in the developing world, girls are more likely to become mothers than to finish school. I am a 13-year-old girl who loves to read the Hunger Games and sing songs by Taylor Swift. On weekends, I like to go to the movies with my friends. It’s hard for me to imagine being a 13-year-old married mother.

Did you know that by the time you finish reading this article, about 52 girls under the age of 18 will have just been married?

Consider these facts. One-third of girls in the developing world are married before they turn 18. In Niger, a country in West Africa, more than half of girls under 18 are married. If I lived there, I would likely be married with children celebrating me on Mother’s Day, rather than me thinking about what gift to give my mom.

I started learning about the difficulties girls face around the world at a young age when I became involved with the global poverty-fighting organization CARE. Since the age of 7, I’ve attended CARE’s advocacy conference each year in our nation’s capital, along with hundreds of other passionate volunteers. During the conference, I visit my members of Congress to tell them why investing in a girl’s education and empowerment is important. I know that compared to many others girls my age, I am very fortunate. I want to use my voice to help improve the lives of others around the world. 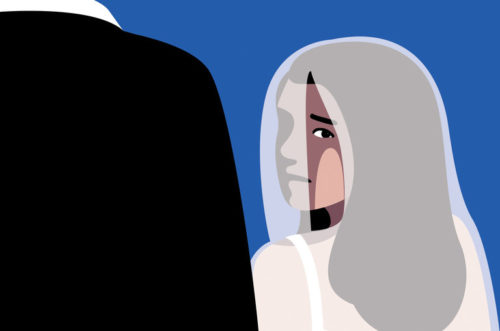 Through my work with CARE, I know that girls and societies will not grow and prosper if girls are married early. Girls need to get an education so they can lead empowered lives. Studies show that girls with at least eight years of education are four times less likely to be married as children. A girl with an extra year of education can also earn 20 percent more as an adult.

U.S. foreign aid has an incredibly positive impact on girl’s empowerment and education around the world, and this delivers lasting change within a community. Studies show that the majority of girls who are married early come from poor families. In many countries, foreign aid helps provide those families with tools, knowledge and services to help their daughters go to school.

Many people who oppose U.S. foreign aid believe that it takes away from resources to solve our domestic issues.Most people believe that the U.S. foreign aid budget is 25 percent of our government’s budget when in reality it is less than 1 percent. Cutting a budget this small won’t fix our other problems. More importantly, the U.S. foreign aid budget creates a huge impact on the lives of people around the world. Programs funded by this budget help girls, women and many other disadvantaged groups get an education, become economically independent, move up in their communities, and break the cycle of child marriage.

We need to protect our foreign aid budget so we can continue to prevent child marriage. We shouldn’t have 13-year-old brides and mothers in this world. As a 13-year-old girl, I am not ready to be married and have children. So this Mother’s Day, while you are celebrating with your mother, think about all the child marriages and teenage mothers around the world. Join me and tell your members of Congress to keep funding the foreign aid budget so that Mother’s Day is not a celebration for 13-year-old mothers.

Kiran Kochar McCabe was in the 8th grade at Takoma Park Middle School when she wrote this. She is currently a college student in Washignton, D.C.