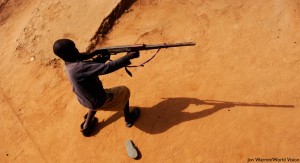 Forgotten in the Shadows of War
The Terrorized Lives of Somali Child Soldiers
More nations sign on to initiative to end use of child soldiers
The US Blinks, and Children Will Suffer (Blog by Jo Becker from Human Rights Watch)
UN reports ‘grave violations’ against children in Chad including child soldiers and rapes
From playground to battleground: children on the frontline in Somalia
10 Facts about Child Soldiers…
Iran ‘Using Child Soldiers’ to Suppress Tehran Protests

The CLC’s Open Letter to President Obama on His Next Secretary of Lab...Of Ships and Men–Cameron Conaway’s Poem about the Children Who Break... Scroll to top
Twitter – Check out the CLC’s Twitter stream YouTube – check out child labor videos on the CLC YouTube channel