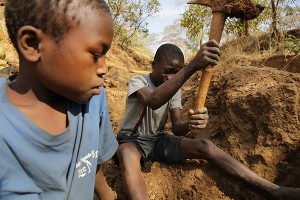 “Tanzanian boys and girls are lured to the gold mines in the hopes of a better life, but find themselves stuck in a dead-end cycle of danger and despair,” said Janine Morna, children’s rights research fellow at Human Rights Watch. “Tanzania and donors need to get these children out of the mines and into school or vocational training.”

Many children who work in mining are orphans or other vulnerable children who lack basic necessities and support. Human Rights Watch also found that girls on and around mining sites face sexual harassment, including pressure to engage in sex work. Some girls become victims of commercial sexual exploitation and risk contracting HIV or other sexually transmitted infections.

Human Rights Watch visited 11 mining sites in Geita, Shinyanga, and Mbeya regions, and interviewed more than 200 people, including 61 children working in small-scale gold mining. The employment of children in dangerous mining work is one of the worst forms of child labor under international agreements, to which Tanzania is a party.

“On paper, Tanzania has strong laws prohibiting child labor in mining, but the government has done far too little to enforce them,” Morna said. “Labor inspectors need to visit both licensed and unlicensed mines regularly, and ensure employers face sanctions for using child labor.”

Child laborers, as well as children living near mining sites, are at serious risk of mercury poisoning. Mercury attacks the central nervous system and can cause lifelong disability to children, whose developing bodies are more easily affected by the heavy metal. The miners, including children, mix mercury with crushed ground ore and burn the resulting gold-mercury amalgam to release the gold, exposing them to poisonous mercury fumes. Even small children who are not working are often present during this process, which is sometimes carried out in the home.

Most adult and child miners are unaware of these health risks. Health workers lack training and facilities and are not equipped to diagnose or treat mercury poisoning. Existing laws and initiatives on mercury have largely failed to reduce mercury use.

Tanzania has helped craft a new global treaty to reduce mercury exposure worldwide, which more than 140 governments agreed upon in January 2013. The Minamata Convention on Mercury, named for the site in Japan of a mercury poisoning disaster half a century ago, will be adopted in October near Minamata.

“Tanzania helped bring about the Minamata Convention on Mercury,” Morna said. “Now, to protect the future of its own people and of its own growing mining industry, it needs to take the lead to protect its children – by monitoring, testing, and treating them for mercury exposure and getting them out of the mines.”

Working in the mines interferes with children’s education. Children working in mining sometimes skip classes or drop out of school altogether. Teachers told Human Rights Watch that school attendance and performance decreased when a gold mine opened nearby. In addition, many adolescents seek full-time employment, including in mining, because they lack access to secondary school or vocational training.

A 15-year-old boy in the Geita district summed up the impact of mining on his life: “It is difficult to combine mining and school. I don’t get time to go through tutoring [which takes place on the weekends]. I wonder about the mine, it distracts me…. One day … I fell sick [after mining and missed classes]. I had pain all over my body.”

The Tanzanian government should expand access to secondary school and vocational training and improve child protection, Human Rights Watch said. The government and donors should provide financial and political backing for the new action plan on the most vulnerable children and include orphans from mining areas in the Tanzania Social Action Fund’s program of grants and conditional cash transfers to vulnerable populations.

The World Bank and other donors to the mining sector should also support steps to end child labor in mining and reduce the exposure of children and adults to mercury, Human Rights Watch said. For example, they should help children transition from work in unlicensed mines to schooling, and ensure that newly licensed mines do not use child labor. A current US$55 million World Bank project to support the mining sector does not directly address child labor.

The gold industry has a responsibility to ensure it does not benefit directly or indirectly from unlawful child labor, Human Rights Watch said. Yet most gold traders Human Rights Watch interviewed in Tanzania had no procedures to keep gold mined by children out of their supply chains.

Small traders typically purchase gold directly at the mines or in mining towns and then sell it to larger traders in Tanzania. Sometimes the gold passes through several intermediaries before reaching the traders who export the gold. According to the Tanzanian government, small-scale miners produced about 1.6 tons of gold in 2012 – worth about US$85 million.

The top destination for gold from Tanzanian small-scale mines is the United Arab Emirates (UAE). Gold is also exported to Switzerland, South Africa, China, and the United Kingdom.

“Whether small or large, Tanzanian or global, businesses should avoid becoming entangled with unlawful child labor in their supply chain,” Morna said. “As those with the buying power, gold traders have leverage over their suppliers. They should use it to protect children and to protect consumers from buying gold tainted by child labor.”

For selected accounts from the report, please see below.

Accounts from Tanzanian child miners in “Toxic Toil”
“I was digging with my colleague. I entered into a short pit. When I was digging he told me to come out, and when I was about to come out, the shaft collapsed on me, reaching the level of my chest … they started rescuing me by digging the pit and sent me to Chunya hospital.” – 13-year-old boy, Chunya district, December 2012

“One time the pit collapsed. It was September last year. I thought I was dead, I was so frightened. I was digging down and I went horizontally and then the rest of the land slid. I was just behind the landslide, not inside. Two of my friends [both adults] who were on the other side died. I was so scared. I just cried and despaired.” – 17-year-old boy, Kahama district, October 2012

“I was hurt from the instrument I use to dig. I was drilling. I was sent to hospital. I hurt a toe. The whole nail was peeled off. I took medicine. When I was drilling I drilled on the stone and then the instrument lost direction and landed on my foot…. I was 12 [when the accident happened].” – 13-year-old boy, Chunya district, December 2012

“[I] once knocked till my nail was removed. I was taken to a hospital and they put a bandage…. I was seven years old. It was a hammer that hit me…. [I am] scared a lot, nowadays I do not prefer crushing, I do other processes.” – 10-year-old girl, Kahama district, December 2012

“A lot of men approach me … always showing me money…. Sex work is very common. [There are] many women coming from town…. I had a friend who is doing that. Most of those are working in the bar. Sometimes they stay here [on the mine] … they sacrifice themselves in the forest. They create a hut and stay.” – 15-year-old girl working in mining, Chunya district, December 2012

“It’s a bad situation here. There are no latrines and no water for bathing…. I do not like it here. Men want to have relationships…. A guy came to the restaurant and said I want you to be my girlfriend and to make you laugh, because I love you … Later when I refused, he said I was foolish. There have been many other cases like this. Some come to buy you food or soft drinks…. I would like to go to Mwanza [the capital of the region] and get tuition to go to school there again.” – 16-year-old girl selling food on a mining site, Kahama district, October 2012