Here at the National Consumers League we are very proud that we’ve been a leader in the fight to end child labor since our founding in 1899. Thrity one years ago, we established the Child Labor Coalition (CLC), which merges the resources of nearly 40 groups that are committed to the fight to eliminate child labor. The CLC brings together several major unions and a variety of child rights and human rights groups to perform child labor advocacy.

In the last few years, the coalition has focused increasing energy on child labor in cocoa.  In 2001, news broke that cocoa–the main ingredient in chocolate–was being produced, in part, by large numbers of children who were trapped in the worst forms of child labor in West Africa. An alarmed U.S. Congress decided to act.  First, it threatened to mandate labels on candy bars to help consumers purchase child-labor-free chocolate.

The chocolate industry fought hard to derail the labeling system. In its place, Senator Tom Harkin (D-Iowa) and Rep. Eliot Engel (D-NY) launched a multi-stakeholder initiative called the Harken-Engel Protocol. Eventually, it brought together the chocolate industry, the governments of Ghana and the Ivory Coast (where 70 percent of the world’s cocoa was produced) and the U.S. Department of Labor to try to tackle the problem. Over the next decade, over $70 million would be spent to fix cocoa’s child labor problem. 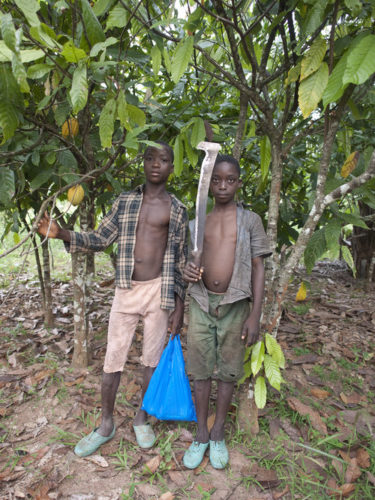 Despite these efforts, a creeping sense that remediation strategies weren’t really working began to emerge. In 2015, Tulane University researchers issued a federally-funded report that said the number of children in child labor in West African cocoa numbered over two million and had not declined. One bright spot was noted: most children in Ghana were attending school but in Ghana and the Ivory Coast children continued to toil, often without pay, and continued to use machetes, carry heavy loads, and apply pesticides—things that made their work dangerous.

This summer, a series of articles in the Washington Post took a close look at cocoa’s child labor problem and rampant deforestation in West Africa and raised alarm even further. The Post also found that efforts to certify cocoa as child labor free were mostly unsuccessful. In some cases, the child-labor-free certified cocoa was actually more likely to have child labor.

The CLC and partner organizations have begun pressuring the chocolate companies to pursue new approaches in combatting the child labor problem.  Foremost, we think it’s critical that the companies pay a higher price for cocoa. Recent research suggests that cocoa farmers make on average about 78 cents a day–but need to earn roughly three times more to attain a “living wage” that provides for their basic needs.

With farmer income this low, it’s no surprise that many farmers make children help grow and harvest the cocoa. Keep in mind: The chocolate industry has annual revenues over $100 billion.

The CLC and other nonprofits had for many years urged better prices for farmers but the industry hid behind claims that anti-trust laws prevented them from paying a premium on market prices, and the companies instead focused on higher yields for cocoa, which we accurately predicted would lead to over-production, more children working, and, ultimately, a price crash. 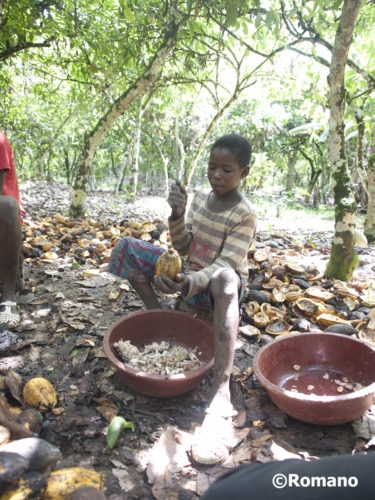 Earlier this year, for the first time Ghana and the Ivory Coast decided to take joint action on the price issue: they issued a demand for a floor price: $2,600 a ton. The move would restore farmer income to levels before the price crash, but still not enough to provide a living wage.

CLC members recently met in an all-day cocoa strategy session and voted to push companies to adopt a price of $3,000 a ton—15 percent higher than the government ask. Farmers deserve more –that’s just a starting point.

We are also coordinating with our partners in Europe who work to advance legislation that would require companies to end child labor in the cocoa supply chain. The Netherlands recently approved such a bill and other European governments are trying to do so. There have been similar, but nascent, efforts in the U.S. Congress and pressure to act will only mount.

The CLC recently met with U.S. Customs and Border Patrol (CBP) which is empowered to place import holds on any goods made with forced child labor. In November, CBP barred tobacco from Malawi from entering in to the U.S. because of forced child labor concerns. CBP could initiate a hold on cocoa imports. We favor limited action to make sure farmers can continue to make a living, but we think a small-scale hold would make the companies feel added pressure to clean up dirty supply chains.

The CLC will continue its efforts to convince the chocolate industry to do the right thing.

We envision the day when children are not asked — or forced — to perform child labor in cocoa, when cocoa farmers make a living wage, and consumers can enjoy chocolate without worrying about its true cost — the human misery that may have produced it.

This piece originally appeared in the November NCL Bulletin.