Blog - Latest News
You are here: Home1 / News & Resources2 / Viewpoint3 / For Love of Chocolate…On World Chocolate Day, We Look at the Human Cost B...
0
SHARES
share on Facebooktweet on Twitter 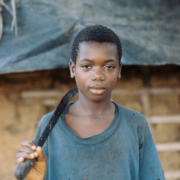 The so-called “Harkin-Engel Protocol” launched in September 2001 brought together eight of the largest chocolate companies, the government of the Côte d’Ivoire, the International Labour Organization’s International Programme to Eliminate Child Labour, the International Cocoa Organization, Free the Slaves, The Child Labor Coalition and the National Consumers League. Other signatories included Senator Herb Kohl (D-Wisc.), Harkin, and Engel. The agreement committed industry to work with NGOs and the West African governments to remedy abusive forms of child labor. 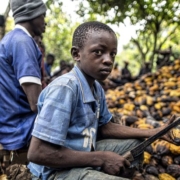 Unfortunately, despite the passage of nearly 16 years, child labor persists in West Africa’s cocoa plantations. A survey conducted by Tulane University researchers commissioned by the US Department of Labor released in 2015 found that although more children were going to school—a very good thing—there had been a 48 percent increase in the number of children in child labor in the Côte d’Ivoire from four years prior and only a little progress in reducing child labor had taken place in Ghana.

When you looked at both countries together, more than two million children were performing hazardous work in cocoa, including cutting down trees, burning fields, applying toxic chemicals, carrying heavy loads, and using machetes. Tulane found that the number of children exposed to hazardous chemicals had increased by 44 percent from four years earlier.

Researchers also noted that older children and young adults had been migrating away from cocoa-growing areas, leaving behind a very young and very old workforce.

Any way you slice your chocolate bar, much work remains to be done. While in Ghana researchers found that 96 percent of children attended school, in Côte d’Ivoire three in every 10 children in cocoa producing areas did not attend school.

The Framework for Action of the Harkin-Engel Protocol requires that 1.5 million children be removed from hazardous cocoa work by 2020. Unfortunately, sharply falling cocoa prices this year have not helped farmers earn sustainable livings in West Africa—one of the keys to reducing child labor.

The 2015 Tulane report suggests that new approaches to reducing child labor in the cocoa sector are needed and the current approaches are not working well enough. During the coming year, the Child Labor Coalition hopes to explore new ideas with the chocolate industry that may help alleviate this crisis.

In the meantime, consumers can express their concern about the situation to their favorite chocolate companies and try to identify the companies that go to lengths to work directly with farmers or cooperatives to improve farmers’ incomes. Divine Chocolate is one such company—farmers own the biggest share of the company. Divine is small but growing, and its innovative structure could be replicated by other companies.

We envision a day when consumers will have readily available child-labor-free chocolate to consume, so that they might enjoy delicious treats free from very negative human costs—child labor, child slavery, and child trafficking—associated with it. It’s certainly a goal worth working toward.